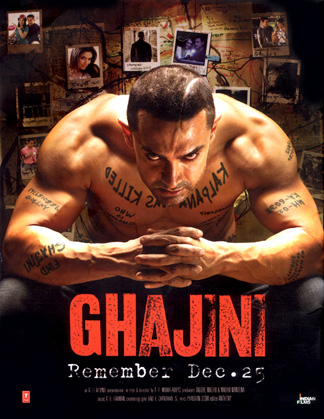 Aamir Khan, besides being one of Bollywood’s most intelligent actors, is also a genius when it comes to marketing his releases. (Remember the impossible to miss Jaane Tu… hype?). But while JTYJN was pitted against the unimpressive Love Story 2050, Ghajini had no lesser than SRK’s first venture with Aditya Chopra since DDLJ to compete with. Obviously then, Aamir was over-indulgent when it came to the promotional campaign for his solitary release of the year.

The pressure to deliver only increased for Aamir when SRK’s supposed magnum opus, Rab Ne Bana Di Jodi, nearly tanked.So has Aamir pulled it off once again? Yes and No if you ask this reviewer. Yes – if you expected Aamir to deliver an action film, the likes of which you rarely see our side of the world and a thumping No – if you expected this to match Christopher Nolan’s Memento.

Let’s first look at the positives: Straight off the bat, one must give director AR Murugadoss a pat on the back for the style in which the whole movie has been shot. Be it a song sequence in the middle of a desert or a chase sequence in the narrow lanes of Mumbai, the man captures both with unexpected ease. The action scenes in particular are a sight to behold. Not since RGV’s path-breaking Satya, has Bollywood witnessed such borderline over the top yet thoroughly disturbing violence.

That however was expected. The fact that the leading-lady, Asin, would turn out to be instantly lovable and thoroughly watchable was totally unexpected. Playing Aamir Khan’s ever-talkative beau, Kalpana, she charms the audiences in a way Madhuri Dixit and Juhi Chawla once did and lightens the otherwise sullen mood of the film. Alongside Saba Azad’s performance which was the saving grace of Dil Kabaddi, her’s is the best female debut of the year in Bollywood.

AR Rahman, as is characteristic of him, delivers a cracker of a soundtrack to cap what has been a golden year for him. And finally, Aamir Khan only further proves what a gem of an actor he is. The same man who had us in splits with his fake amnesia act in Andaz Apna Apna, appears menacingly scary this time around with actual anterograde amnesia. While we’re at it, let’s not take anything away from Pradeep Rawat, who impresses within the constraints of his stereotypical 80s villain role.

The only one who fails to impress despite being given a role that changes the course of the movie is Jiah Khan, who is rather annoying to be honest. Also disappointing is the way director AR Murugadoss almost takes for granted that the audience knows how his amnesia-stricken leading man hunts for clues and instead spends all his time developing the love angle between Aamir and Asin. Ghajini , as a result impresses at the start but loses its way in the middle before finally gripping the viewer in the last 30 minutes or so. Given the fact that the director wasn’t impressed with the last half-hour of the Tamil Ghajini, that last statement may not be such a bad thing after all.

In the end, though this movie does not live up to the pre-release hype, it’s quite an entertaining watch for at least 2/3rds of the way. Just suspend your imagination a bit and try not to compare it with Memento!

Bollywood’s ability to convince the junta that “Hamari film hat ke hai”, is something that never ceases to amuse me. Friday after Friday, the same inane, formulaic plots are rehashed, repackaged, re-released and yet somehow, the audiences rarely seem to spot this. The same can be said for Dil Kabaddi. At face value, this may seem like a very ‘forward thinking’ sex comedy, but if you just take a moment to ask yourself whether you’ve ever seen a multi-star,sex-comedy about polygamous middle-aged couples before, it becomes all too clear that the ‘Hat Ke’ technique has been put to use once again. True, Dil Kabaddi has a slightly meatier script than it’s counterparts such as Masti and No Entry, but that doesn’t necessarily make it a better movie.

The movie begins with a cringe-worthy argument between Mita (Soha Ali Khan) and Samit (Irrfan Khan),over the lack of sex and romance in their marriage. It is here that one is introduced to the theme of the movie ‘Aaj kal hum karte hi nahi.” Next up, we are introduced to Simi (Konkona Sen-Sharma) and Rishi (Rahul Bose), who also seem to be facing a similar drought in their marriage. And in this way,it becomes strikingly clear within the first few scenes itself, that one is not going to witness anything revolutionary in the next two hours or so.

Precious screen time that should been used in character-development, is instead criminally wasted on juvenile, slapstick humor. As a result, characters who could have evolved beautifully in their own unique ways are never allowed to break out of their pre-determined ‘Friends Character’ pigeon-holes. Mita is a career-driven, cleanliness freak much like Monica, while Samit isn’t too far from Chandler’s clumsiness either. Rishi, the dull, uncool professor who has the hots for a student half his age is obviously Ross and you don’t need to be a rocket-scientist to figure out that Simi, who cant keep her eyes off the hot new guy at work (Rahul Khanna), is Dil Kabaddi’s version of Rachel. What’s worse is that there is absolutely no chemistry between the couples and no camaraderie between the characters. When Payal Rohatgi, as a sleazy, airheaded, desperate for attention aerobics instructor, Kaya, is added to the equation, the movie touches a whole new level of annoyance.

Things however, could have been a whole lot worse had it not been for a standout performance by Irrfan Khan. The man steals the show every time he’s on screen, and was the only reason this reviewer was able to endure this movie. For that alone, I give this movie one star. Add another half star for attempting to use theater techniques such as making the characters talk to the camera and for Saba Azad who convincingly plays, the wild-child Raga. That’s about all this movie deserves.

Consider this a one-time watch if words such as ‘Sports Bra’, ‘Condom’ and ‘G-String’ still make you giggle, otherwise run in the opposite direction if someone offers you a ticket to this one.