‘Conservative’ is the last thing you can call Rakeysh Omprakash Mehra. Despite the fact that the audiences largely failed to understand his debut effort Aks, Mehra has never been one to dumb his products down; a quality that few possess in Bollywood today. What is also noteworthy about the man is that he, with each subsequent film, tries to raise not only his standards as a filmmaker but also the collective standard of film-making in India. In a land where the masses swear by No Entry and Masti, his Rang De Basanti was one of the rare instances where intelligent cinema received an almost cult following. The pressure to deliver was immense when it came to Delhi-6; but Mehra in all fairness meets and even exceeds expectations, at least for more than three-quarters of the movie.

Having already struck a chord with the young masses last time around, Mehra could so easily have repeated the hit formula like a certain multiple National Award-winning director. Instead he chose to experiment with a cryptic narrative structure the success of which required the audiences to keep track of multiple parallel story-lines and decipher not-so-obvious metaphors. In this regard at least, Mehra pulls off what most may consider a recipe for disaster without breaking a sweat.

From start to finish, each second of screen-time has been used purposefully, right from the opening credits where Raghubir Yadav (in top form as a Ram-Leela narrator) announces the forthcoming arrival of Lord Rama to battle the evil on earth. The next instant, the scene cuts to a car in New York where Roshan (Abhishek Bacchan) announces to his parents that he will take his grandmother (Waheeda Rahman) to India, where she wishes to spend her final days. To a discerning viewer this subtle hint predicts the rest of the film while for those who fail to negotiate this curve-ball, the analogy becomes more than apparent as the story progresses. Once again the credit goes to Mehra and his team of writers.

When Roshan and his Grandmother arrive in India, Mehra introduces the audiences to the Kala Bandar or Monkey Man, who we at the surface can laughingly consider an absurd figment of an irrational India’s overactive imagination. Metaphorically though, there’s much more to the Kala Bandar; which some may find too much to swallow. One can however excuse this because the script more than justifies the use of this unconventional metaphor.

The genius of Delhi-6 however lies in the manner in which Mehra tackles the cliches such as forced arranged marriages, family feuds, and discrimination on the basis of caste and religion. He treats each of the above mentioned with a fresh approach by fully exploiting an ensemble of Bollywood’s finest. One can’t help but marvel at his casting choices particularly Divya Dutta as the untouchable kooday-wali, Jalebi and Vijay Raaz as the bent policeman. The veterans such as Prem Chopra and Rishi Kapoor too have parts that tailor-made for them.

With the help of his unconventional narrative and fine performances by almost everyone, Mehra delivers a breezy, light- hearted first half which sets up a grimmer second. When the film resumes after the intermission, the friendly banter between the religiously and culturally diverse characters soon begins to border on racism and superstition and irrationality take on ugly proportions. Roshan the inquisitive, do-gooder, NRI is now perceived as an unwelcome intruder, a popular sentiment towards Americans in this part of the world. In terms of scene-lengths as well, the second half is a distinct departure from the first. The blink and you miss it, tongue-in-cheek satirical sequences from the first half are now replaced by slower and lengthier scenes which turn preachy more often than required. And that’s when the movie begins to grate.

Previously unnoticed flaws – such as Roshan’s fake accent and his tendency to make one too many smart alec comments, now stick out like sore-thumbs. In a disappointing usage of Rahman’s ‘Masakalli’, the ambitious and effervescent Bittu (Sonam Kapoor) too allows her dreams to be crushed by patriarchy and is soon tied down by tradition. Screen time which could have been used to further develop any of the promising storylines is instead disproportionately directed to the leitmotif – the Kala Bandar.

As the chaos reaches a climax towards the end, the wheels literally start to come off. Amitabh Bacchan’s inexplicable cameo hammers the final nail in the coffin for Delhi-6. To be fair however, the ending would not have appeared as disappointing as it did, had Mehra not delivered a spectacular show for nearly two hours before it.

Mehra alone knows why he went ahead with the ending that he did, or why some of the most beautiful compositions from the soundtrack such as ‘Arziyan’ and ‘Rehna Tu’ receive such little screen time. But all said and done, one has to credit the man for undertaking an almost impossible challenge and nearly pulling it off. To quote Abhishek Bacchan in his strange accent: “Delhi-6 works. The people make it work!”  Well almost!

Bollywood’s ability to convince the junta that “Hamari film hat ke hai”, is something that never ceases to amuse me. Friday after Friday, the same inane, formulaic plots are rehashed, repackaged, re-released and yet somehow, the audiences rarely seem to spot this. The same can be said for Dil Kabaddi. At face value, this may seem like a very ‘forward thinking’ sex comedy, but if you just take a moment to ask yourself whether you’ve ever seen a multi-star,sex-comedy about polygamous middle-aged couples before, it becomes all too clear that the ‘Hat Ke’ technique has been put to use once again. True, Dil Kabaddi has a slightly meatier script than it’s counterparts such as Masti and No Entry, but that doesn’t necessarily make it a better movie.

The movie begins with a cringe-worthy argument between Mita (Soha Ali Khan) and Samit (Irrfan Khan),over the lack of sex and romance in their marriage. It is here that one is introduced to the theme of the movie ‘Aaj kal hum karte hi nahi.” Next up, we are introduced to Simi (Konkona Sen-Sharma) and Rishi (Rahul Bose), who also seem to be facing a similar drought in their marriage. And in this way,it becomes strikingly clear within the first few scenes itself, that one is not going to witness anything revolutionary in the next two hours or so.

Precious screen time that should been used in character-development, is instead criminally wasted on juvenile, slapstick humor. As a result, characters who could have evolved beautifully in their own unique ways are never allowed to break out of their pre-determined ‘Friends Character’ pigeon-holes. Mita is a career-driven, cleanliness freak much like Monica, while Samit isn’t too far from Chandler’s clumsiness either. Rishi, the dull, uncool professor who has the hots for a student half his age is obviously Ross and you don’t need to be a rocket-scientist to figure out that Simi, who cant keep her eyes off the hot new guy at work (Rahul Khanna), is Dil Kabaddi’s version of Rachel. What’s worse is that there is absolutely no chemistry between the couples and no camaraderie between the characters. When Payal Rohatgi, as a sleazy, airheaded, desperate for attention aerobics instructor, Kaya, is added to the equation, the movie touches a whole new level of annoyance.

Things however, could have been a whole lot worse had it not been for a standout performance by Irrfan Khan. The man steals the show every time he’s on screen, and was the only reason this reviewer was able to endure this movie. For that alone, I give this movie one star. Add another half star for attempting to use theater techniques such as making the characters talk to the camera and for Saba Azad who convincingly plays, the wild-child Raga. That’s about all this movie deserves.

Consider this a one-time watch if words such as ‘Sports Bra’, ‘Condom’ and ‘G-String’ still make you giggle, otherwise run in the opposite direction if someone offers you a ticket to this one.

Yesterday I blogged about how Barack Obama showed even when the odds are seemingly insurmountable, dreams can still come true. While Barack may be the man of the hour, one man could soon overtake his popularity. I have just three letters for you, ladies and gentlemen, K-R-K. That’s no typo you idiots, I didn’t actually want to type S-R-K , he’s old news. I’m talking about the fresh new wave of awesomeness that is about to sweep the shores of Bollywood, and possibly the world – Kamaal Rashid Khan! Known in his hometown as the ‘Prince of Kameenas’ or ‘Kameena Raj Kumar’ (which is also a forced backronym of his initials), KRK has shown the world that awesomeness cannot be held back, no matter what! Any time now his debut phillum Desh Drohi will be released.

So what if no producer was willing to invest on him, KRK didn’t need their money! He went ahead and financed his own freakin movie. In your face Farhan Akhtar! Now you might say, “Big deal, he’d probably make some shoe-string budget movie with a bunch of unknown actors!” Wrong again my fraands! KRK has not only managed to rope an actress whose last two movies have both been declared tax free (one of them even went to the Oscars!) he has also has not one but TWO item girls in his movie! Now before you scream ‘Holy-Dhan-Dhana-Dhan-Goal’, hold your ghodas…because there is more! 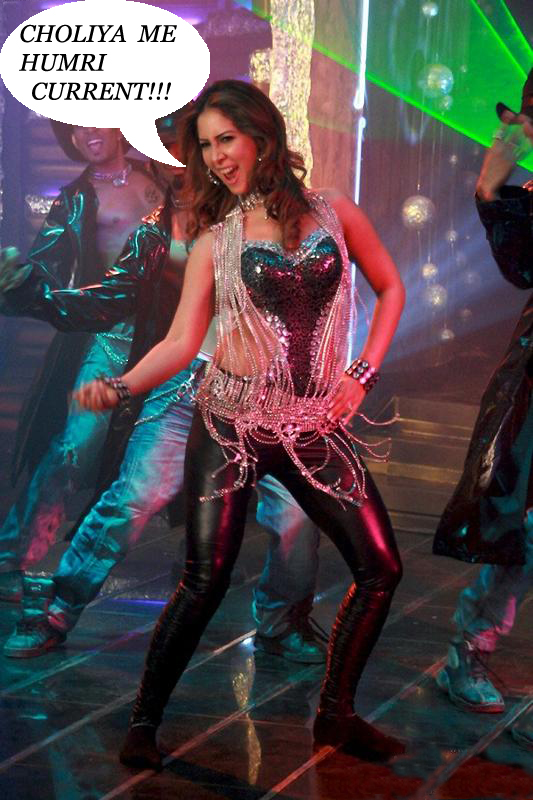 Now any sadharan, mamuli actor would fight one villain, chalo two…okay chalo three bas! But KRK is no ordinary actor my fraands,  he fights not four, not five, heck not even half a dozen villains. He fights over ten of them! Rumor has it that when the censors refused to clear Desh Drohi on the grounds that it had too much violence, KRK shot three of the five censor board officials through the screen with his lethal gun locket! The other two have since gone underground, never to be seen again. 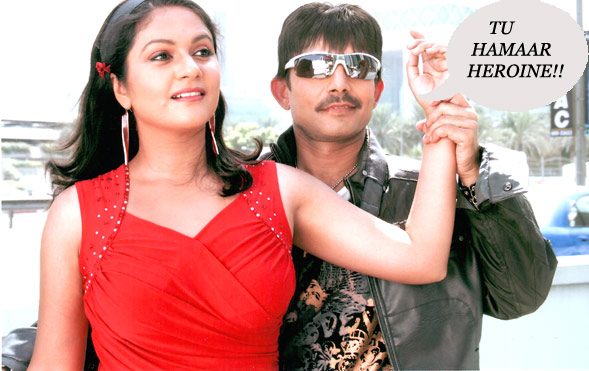 I know what you’re thinking, “This is a mad man! All that his movie has is sex, violence and narcissism”. Well that’s where you are wrong again. Desh Drohi, features all that PLUS a brilliant social message and not to mention, world-class dialogues.

As you may have guessed, KRK has descended upon our planet not just to start a trend with his awesome hairstyle and glares but to also unite the nation. “Hindustan Ek hai!” he proudly proclaims.

Now I don’t know about you guys, but I personally am sold on this one! So though right now Desh Drohi’s release has been postponed, I’m sure our herowa will defy the oddwas again and come soon to a theaterwa near us!

Now you all know that I always appreciate a good Superhero movie. >>Click here<< for proof. But I’ve felt sad at the way Bollywood never produced a great Super Hero movie. Turns out I was wrong. We have already done that! No No I don’t mean Krrissh or Drona, I mean Govinda and Kimi Katkar as Superman and Spiderwoman!

Don’t believe me kya? Here have a look for yourselves!